Turning Over Another Win 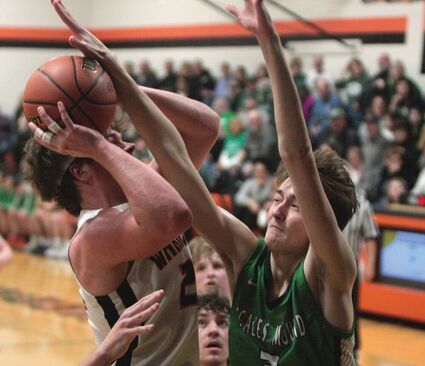 Warren's Brady Stietz can't get the shot past the block of Scales Mound's Dylan Slavenburg.

It's really not too hard to figure out how the Scales Mound Hornets have been so successful this season in spite of graduating all five starters from last season's third place in state team.

"That's our game," said head coach Erik Kudronowicz. "We turn opponents over and then turn that into points at the other end."

No team is better equipped to do it with seniors Charlie WIegel and Jacob Duerr handling the point guard defensive positions, the two seem to have a sixth sense in regard to what the other is going to do.

"Every time I get a steal, the first thing I do is look up...