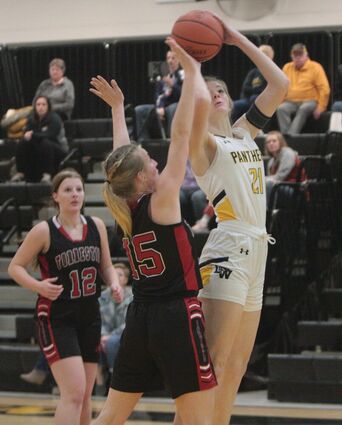 Eden Dietz scores inside against Forreston during third quarter action.

The Forreston Cardinals were far from being at full strength as they are missing some starters due to injuries, and it only got worse in the second period as Jaiden Schneiderman went down with a turned ankle. As a result, Forreston was stuck sitting in a 2-3 zone all night in order to try and slow down the Panthers, and ... that's not a good thing to do.

Tianna Esser drained a three point bomb to open the game, then added another to open the second half. And when the Cardinals tried to extend out to challenge the perimeter, the Panthers dumped the ball inside to Grace Groezinger who tallie...