Too Big And Too Many 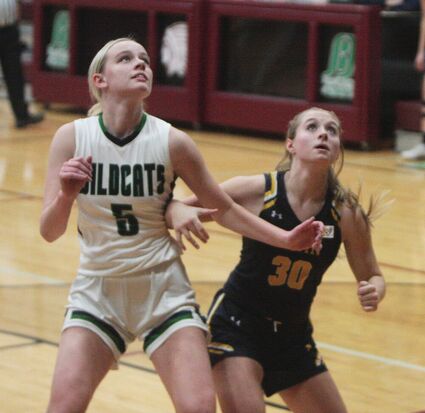 Aquin's Hanna Pizzolato (30) had to try and block out and defend against Anniston Werner of RR/SM who had more than an eight inch advantage. Across the board, Aquin was undersized.

The Aquin Lady Bulldogs and River Ridge/Scales Mound Lady Wildcats squared off at the Dakota Turkey Tournament Tuesday night in a battle of unbeatens, but it was the Wildcats who ran away with a dominant 67-44 victory.

The Wildcats jumped out to the early 8-2 lead as Aquin simply had no answer for Sydney Driscoll in the middle. The senior post was getting fed the ball, and even with defenders hanging on her, would muscle up the inside shot. But when the Wildcats subbed Driscoll out as part of a five player swap, suddenly Aquin exploded.

Megan Holder became a one guard wrecking crew as she...