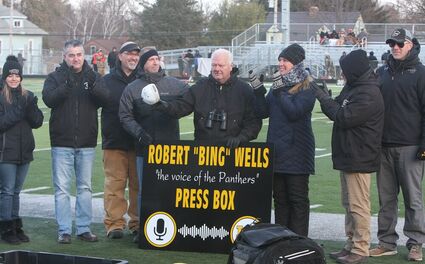 Bing Wells (center) was honored at halftime of the 1A State semi-final football game in Freeport against Forreston.

A 1963 graduate of Lena-Winslow High School, a member of the United States military, and a retired Illinois State Trooper, Robert "Bing" Wells has been the voice of Lena-Winslow football, track, and boy's basketball since 1972. Bing has pretty much seen it all in his time as the voice of the panthers. From some of the not so great years of the football program, to the happier moments like state championship football teams and state tournament bound basketball teams, Bing has been there.

Bing Wells has always represented Lena-Winslow in the most honorable way. Decades of athletes at...