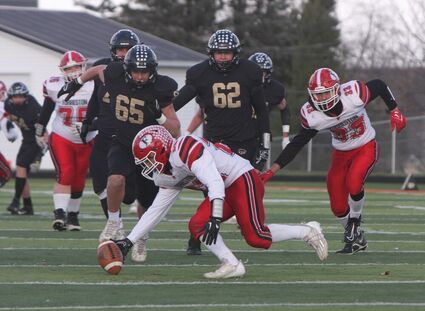 Maisen Smith (65) made the game changing play in the first quarter.

It had to be Forreston.

Of all the teams in the NUIC, the biggest challenge to the Panthers over the last decade has been the Forreston Cardinals.

For five straight years Lena-Winslow has been in the 1A State semi-finals, and the one time they lost ... was to Forreston.

And this season, as the Panthers dominated every opponent by more than 22 points, and piled up running clocks every week ... the one exception was their 28-14 tough win against Forreston.

So even when the Cardinals were 4-3 and in jeopardy of not making the post season, Panther fans and coaches knew better.