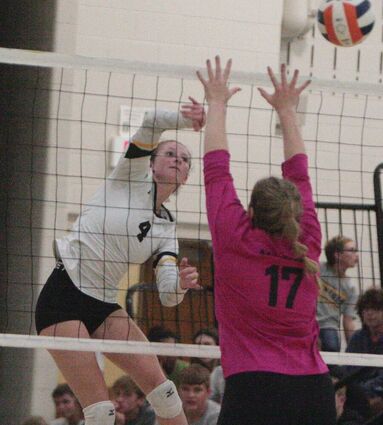 Kaidynce Lynch fires a kill down the line during game one action against Dakota.

We'd been hearing it ever since the season began, and had seen it in the numbers whenever the Lena-Winslow Panthers went off to play in a high-end tournament somewhere, but Tuesday night was the first time the home fans got to see the Panthers at the top of their game as they dominated a very strong Dakota Indian squad 25-16, 25-13.

"We wanted this so bad," said setter Alyssa Daughenbaugh. "I got up at five Monday morning to come here to practice at six, it was all I could think about all day."

She wasn't exaggerating. Being able to beat...