Lucy In The Sky Hits Diamonds 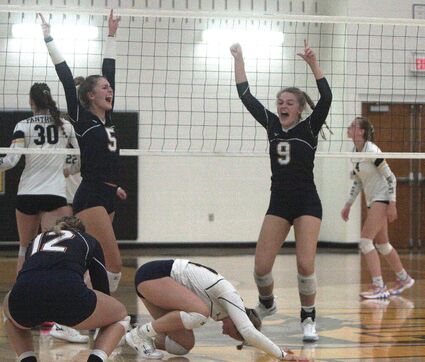 Aquin players react as the final point is scored in their marathon 31-29 game one win at Lena-Winslow.

Game one between the Aquin Bulldogs and Lena-Winslow Panthers was one of the most thrilling, edge-of-your-seat back and forth battles ever witnessed. Both teams used both of their time outs, and both of them had huge plays by huge players, but as the score climbed to the terminal mark of 25 ... neither team was in charge.

"I don't know about you Dan, but my heart is racing right now," said Aquin head coach Robyn Stovall. "Have you ever seen a more exciting game?"

Four times, the Panthers had the Bulldogs on the brink – holding a one point lead and the serve, but each and every time Aqui...