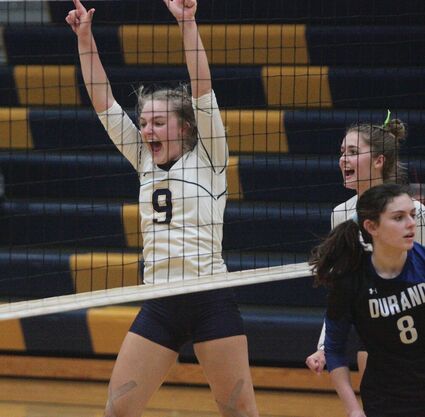 Aquin's Bentley Stovall reacts to a big kill she made in the middle.

Aquin's Lucy Arndt was only three kills away from the 1000th of her career – a feat that was mastered in game one with Aquin up 5-1 on a tip kill over the double block by the Aquin senior.

In all likelihood, Aquin came in fired up and ready for the short ceremony that paused the game and announced her accomplishment, as they built on the early lead – never letting Durand get rolling – and behind a six kill effort from Arndt they rolled to the game one win 25-18.

But in game two, the air went out of the Aquin sails. Unforced errors began to come in bunches for the Bulldogs in white,...