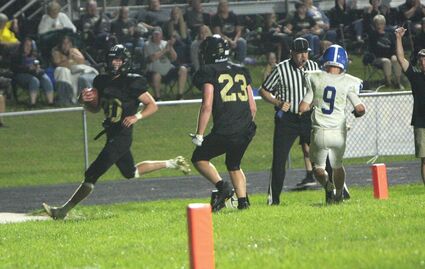 Gunar Lobdell was 'officially' introduced as a member of the Lena-Winslow backfield as he ran for 166 yards and two scores.

The Galena Pirates have a solid football program – anybody thinking otherwise is kidding themselves – but even good teams can have the walls cave in on them, and the Lena-Winslow Panthers have been breaking down walls ever since the season started.

To say that the Panther running game is potent would be like saying the Grand Canyon is a nice sized ditch. With Gage Dunker pounding the middle, and the speed of Jake Zeal on the outside, the Panthers have been running over the competition. But until Friday against Galena, the newest weapon in the arsenal – Gunar Lobdell – had not shown...