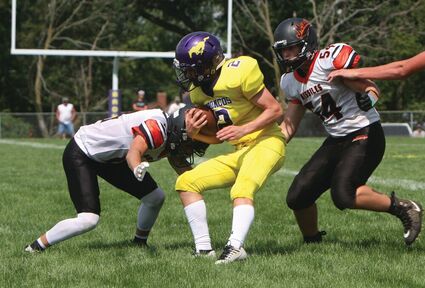 Milledgeville wrapped up the Broncos in the first half.

By several accounts, the Orangeville Broncos opened up the return of the Jay Doyle era with a lot of promise: the Broncos had 166 yards rushing while the Milledgeville Missiles only got 104; the Broncos threw for 46 passing yards and had more total offense than Milledgeville – 212 to 185; and although sidelined for the first three quarters for disciplinary reasons that carried over from the year before – when Blake Folgate was finally allowed to play he burst through for 68 yards and a touchdown.

In many ways, Orangeville showed that there is a great deal of promise this coming season...