Panthers Win A Looney One 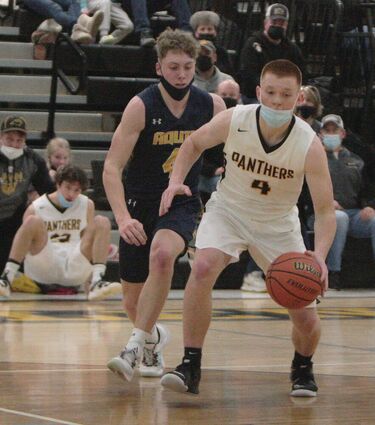 In the craziest play we've ever seen, Kam Klever (picking himself off the floor out of bounds in the background) made a diving one handed pass between the legs of Aquin's Evan Broge to Gage Dunker for the easy bucket.

Strange things can happen in sports – any sport – but it might be several years before anybody sees anything as crazy as what took place in Lena-Winslow's 55-53 victory over Aquin in Lena Thursday night.

Perhaps the best example took place in the second quarter, when a ball was tipped by an Aquin defender off of Lena-Winslow's Kam Klever. As it headed out of bounds, everyone knew it was either going out of bounds, or would be tipped back to Evan Broge who was in perfect position to make the steal – so almost the entire Panther team began to head back down the floor to play defense....