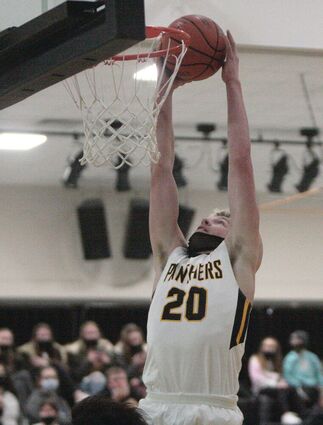 Lena-Winslow's Brody Mahon finishes off a full court drive by slamming the ball home for a dunk against Forreston.

Lena-Winslow knew that their contest at home Monday night against Forreston would not see the Cardinals at full strength. Stuck in the midst of a rebuilding year to begin with, Forreston was further depleted due to missing some players because of Covid. But the game was very much in doubt early on as Forreston had a knack for stripping the ball away before the Panthers were able to even put up a shot.

At the first mask time out, Lena-Winslow was up 9-6, but the entire game changed over the next two minutes because Panther senior, Brody Mahon, went off!

Forreston simply had no answer for M...