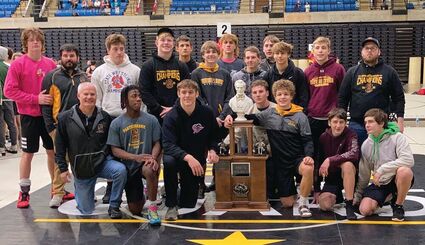 The Lena-Winslow/Stockton Pantherhawks always compete in the huge holiday wrestling tournament – Abe's Rumble. And even though it is a challenging 64 team field they have to square off against, the Pantherhawks have won the prestigious tournament, and are seen as a major competitor.

Well, over the holiday break, head Coach Kevin Milder claimed his 500th victory as the Pantherhawks brought home the Championship trophy from Abe's Rumble yet again!

The championship bout was against Coal City – a major 1A power in wrestling – and the while every bout is critical, the pivotal win came in...