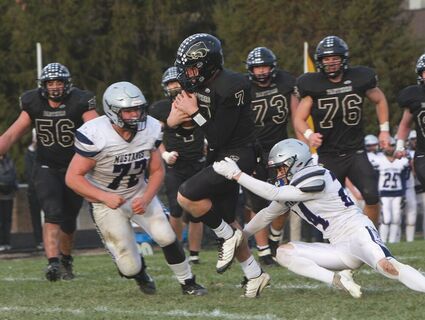 Lena-Winslow quarterback, Luke Benson, was a major factor in the Panthers semi-final victory over Ridgeview/Lexington Saturday in Lena, but he's used to not getting a lot of the headlines.

"My job is usually to carry out my fakes and hand the ball off," he said. "As long as we're winning, I'm fine with that."

But on Saturday, he opened the scoring when he used his powerful legs to push into the end-zone on a one yard quarterback sneak.

On the following conversion, he faked handing the ball on a sweep to the left, but rolled out right with the ball – so nobody in sight – and raced in...