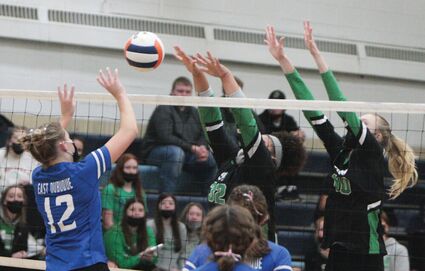 When the final tip attempt fell into the net in game three, the Hornet celebration officially began.

In the opening match of the Galena Class 1A Volleyball Regional, it appeared to everyone in attendance that the East Dubuque Warriors were going to move on to the semi-final round. The Warriors had already claimed game one in impressive fashion behind eight kills by senior Anna Berryman to win going away 25-16.

But you have to win two games to claim the match victory, and Hornet head coach Keri Werner knew her team had a lot more in it.

"We played too timid in game one," Werner said. "I told them we have to be more aggressive and stop trying not to make a mistake – just play."