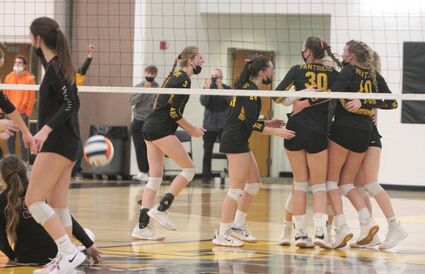 When the final ball hit the floor to complete Lena-Winslow's dramatic win, the celebration exploded on one side, while tears couldn't be contained on the other.

All season long the Lena-Winslow Panther Volleyball team had shown flashes of excellence as they would have a strong of plays that seemed to be on another level. But at some point in the match, something would happen, a let down or big hit would occur, and suddenly all of the high level play they had been pulling off would crumble away and they'd lose ... yet again.

This was the team that never beat Aquin, Dakota, Durand or Pearl City all season long. In fact, they never had a high quality win all season long – but none of that mattered Wednesday night as they played host to the 25 win D...