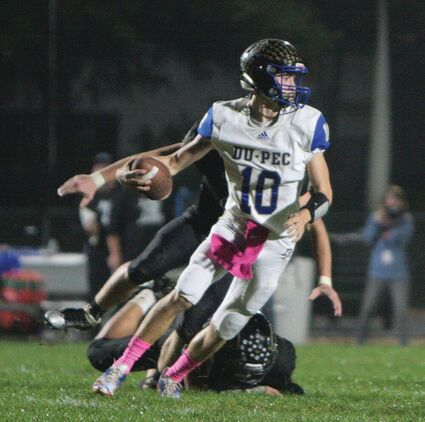 Du/Pec's Hunter Hoffman is easily the best quarterback in the region, and he riddled the Panthers early for a 22-0 lead.

The Du/Pec Rivermen finally exorcised the demons that had been plaguing them ever since the remarkable 14 point come back with five minutes to play that Lena-Winslow pulled off last season. While Panther fans fondly remember the victory, they didn't quite appreciate how deeply the scar was imbedded into the Rivermen.

Let's be honest. For 23 minutes and 58 seconds, the Rivermen were dominating Friday's contest against the Panthers. They had marched up and down the field, putting up a 22-0 score, and Lena-Winslow was 31 yards away with 1.2 seconds left in the half.