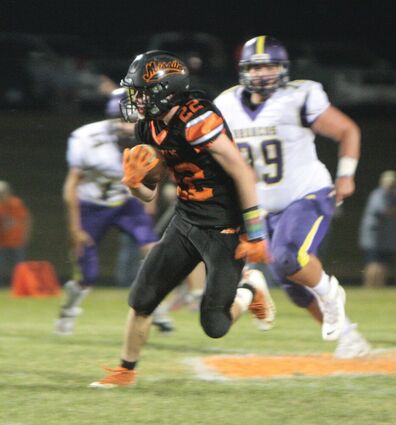 Ashton Nobis broke the Broncos back wit his 55 yard touchdown run on the first play from scrimmage in the third quarter.

The Milledgeville Missiles did not have more athletes than Orangeville. They did not hit harder, or overpower the Broncos. No, the key to their impressive 56-26 dismantling of Orangeville Friday night was that they confused the Broncos ... repeatedly.

Early on, it seemed that the decision to get the ball first was a good one as Gunar Lobdell broke loose for a 55 yard touchdown run on the fourth play from scrimmage to put the Broncos up 6-0. The kick was blocked, but Orangeville had drawn first blood.

The fickle Fates of Football seemed to be smiling on the purple when Milledgeville connec...