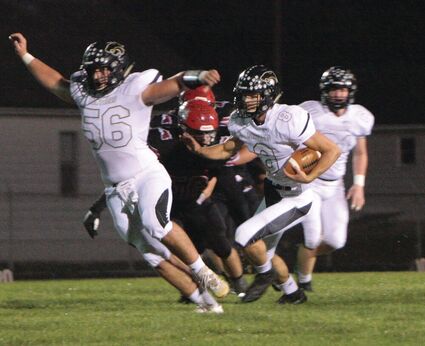 Lena-Winslow's Ethan Fye follows the blocking of Max Sargent as he rips through Fulton for more yards to set up the second score of the game.

It was supposed to be a challenge, and for a while it was until a pair of special teams plays helped the Panthers establish dominance, and an injury ended any chances Fulton had of being able to compete in a 54-7 drubbing that was not as lopsided as the score.

Fulton found out the hard way what everyone else has been learning about the Panther defense ... it's pretty damn good as the Steamers went three and out on their opening possession.

Lena-Winslow countered on their third play from scrimmage as Brady Eilders burst up the middle on a quick hitter and raced 56 yards for the first score...