More Important Than A Match 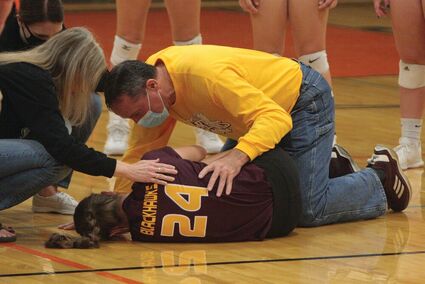 The match became secondary when Stockton's Madalyn Mammoser went down with a twisted knee.

The Stockton Blackhawks were out in front of Milledgeville at the Missiles house in game one of their non-conference match by a 24-19 score, and the story of the night to that point had been the play of freshman Madalyn Mammoser who was ruling the middle of the net for the Blackhawks.

She already had four kills, and thought of a headline "Mammo Owns The Middle" were already formulating when all of a sudden, she went up to try and block a kill attempt by the Missiles, but as she came down her knee bent sideways and she collapsed to the floor in pain.