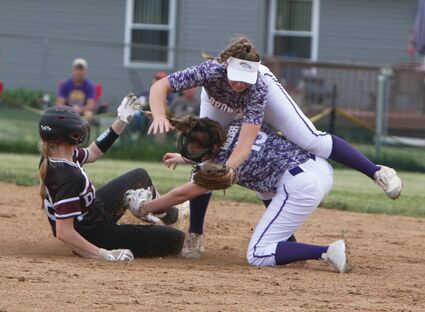 As Tabytha Toelke came in to steal second, Tessa Janecke and Megan Holder got confused over who was supposed to cover the bag.

Fans had to wait a while longer than expected to see the Orangeville Lady Broncos take on Dakota in the Regional final at Orangeville last Tuesday.

When the game opened, Dakota drew first blood as the Broncos seemed a bit off-kilter after Tabytha Toelke stole second base after knocking in the first run of the game.

With the sun beating down, and several clouds in the sky, what began as a slight lightning delay turned into an hour long rain delay as the sky opened up and it poured down on the field with Dakota holding the 1-0 lead in the bottom of the second inning.