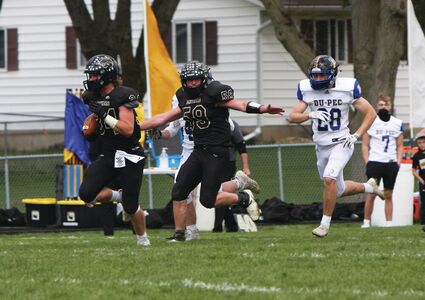 Jack Setterstrom races down the sideline, escorted by Cole Gerber, after picking up the blocked punt that turned the game against Du/Pec.

The game was over ... everybody knew it ... with five minutes to play, the Du/Pec Rivermen held a 21-8 lead over the Lena-Winslow Panthers ... and had possession of the ball! The Rivermen themselves were beginning to celebrate, while Panther players admitted they were about to give up.

But instead of running clock, the Rivermen passed incomplete on two plays, so that only one minute had elapsed off of the clock as they stepped back to punt with just over four minutes left in the game.

"We don't practice our punt block at full speed in practice because we don't want to get anybody hurt," a...