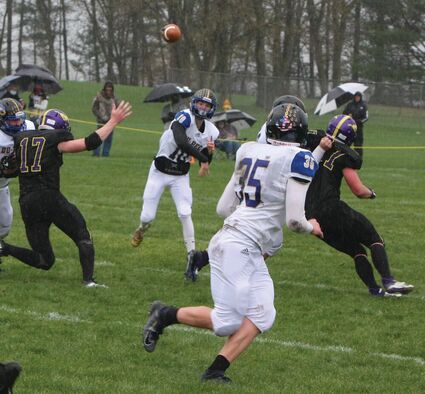 Du/Pec's Hunter Hoffman threw for 352 yards and seven touchdowns in only the first half of play!

With a steady rain falling throughout the day, the expectation was that it would make the field wet, muddy, and in doing so benefit the Orangeville Bronco running game that would simply "out-muscle" the Du/Pec Rivermen.

That was the belief, and when Cade Janecke broke through the middle of the line for a 44 yard touchdown only 56 seconds into the contest, the Broncos were looking like they would be in good shape.

Hunter Hoffman led the Rivermen to the tying score by converting on two different fourth down plays – one of them fourth and 14 at the Bronco 35 – but Bronco fans were still...