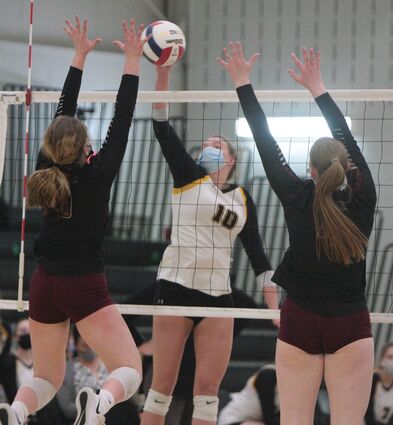 Lena-Winslow's Kalli Humphrey tries to place a kill between the Dakota blockers.

With all due respect to Galena, who we have yet to see in person, the Dakota Indians proved without a doubt that they are the top team in the region with a dominant 25-12, 25-10 sweep over the Lena-Winslow Panthers in Lena Tuesday night.

From the very beginning, this wasn't a contest, it was an exercise in execution as the Indians put on an offensive display of hitters that simply overpowered the young and rebuilding Panthers.

Everyone knows about Tabytha Toelke, the Division I bound superstar in maroon had a quiet day from Toelke standards – but still had six kills and a pair of stuff...