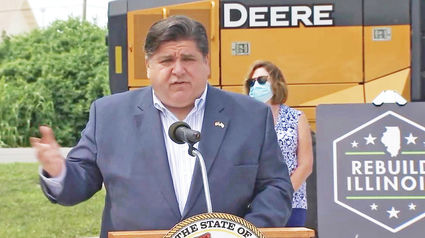 Gov. JB Pritzker speaks at a news conference Tuesday, July 21, in Collinsville in unveiling the state's six-year capital infrastructure plan. Each year IDOT unveils its multi-year plan, and this year's did not take into account anticipated revenue losses resulting from the COVID-19 pandemic, according to a summary of the plan. (Credit: illinois.gov)

Hours after filing a court document implicating – but not charging – Illinois' House Speaker Michael Madigan in a yearslong bribery scheme, federal officials took to the courtyard of the Dirksen Federal Building in Chicago on Friday, July 17, to deliver a message to those engaging in public corruption: "We will find you too."

The charges in the document filed Friday are officially against Commonwealth Edison, Illinois' largest electric utility company, which has agreed to pay $200 million and to continue cooperating with an ongoing federal corruption probe in order to defer prosecution...