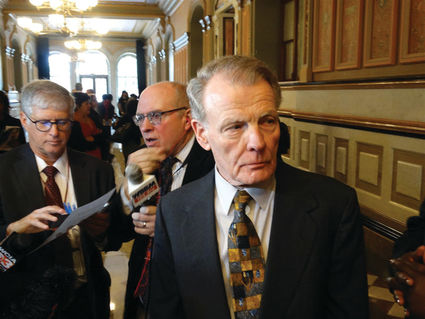 House Speaker Michael Madigan is shown in this file photo from Oct. 28, 2019, at the Capitol in Springfield. Madigan is referred to as "Public Official A" in federal court documents filed Friday in which ComEd agreed to pay $200 million to resolve a federal investigation into a "yearslong bribery scheme." (Capitol News Illinois file photo)

Hours after filing a court document implicating – but not charging – Illinois' House Speaker Michael Madigan in a yearslong bribery scheme, federal officials took to the courtyard of the Dirksen Federal Building in Chicago on Friday to deliver a message to those engaging in public corruption: "We will find you too."

The charges in the document filed Friday are officially against Commonwealth Edison, Illinois' largest electric utility company, which has agreed to pay $200 million and to continue cooperating with an ongoing federal corruption probe in order to defer prosecution for a sin...