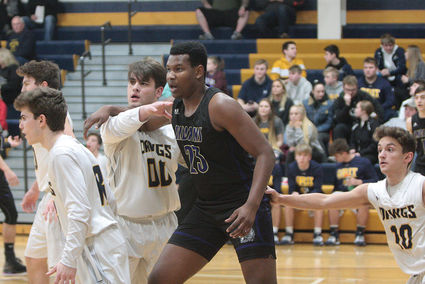 Pecatonica had a big size advantage which not only gave them a big rebounding edge, but also drew in the Aquin defense that allowed the Pecatonica perimeter shooters to go off.

In their previous two meetings, the Pecatonica Indians had topped Aquin by making drives to the basket and attacking the inside, so the Bulldogs were prepared for that to happen. What they didn't see coming – and nobody saw coming – was a Pecatonica team that shot lights out from behind the three point line.

Pecatonica drilled eleven – yes, eleven – three point bombs to pile up a hue 19 point lead over the Bulldogs, but then had to hold off a furious Aquin rally in order to claim the 71-63 conference victory in Freeport.

From the outset, the Bulldogs were in trouble. Six foot four...