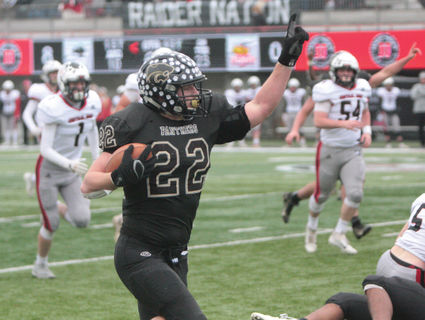 Sean Ormiston celebrates his first touchdown of the game as he completes a 23 yard score that put the Panthers up 14-0.

When the final statistics and numbers were relayed in the IHSA media room for the postgame interviews, they were nothing short of staggering.

With their 58-20 blow out victory over Central A & M in the 1A State Championship, the Panthers finished with a perfect 14-0 record – which in and of itself had been done before. But the 2019 Panthers also obtained a running clock (40 point lead) over eleven of their 14 opponents over the course of the entire season. And to top it all off, the Panthers had trailed in a game – all season long – for a grand total of only 56 seconds.