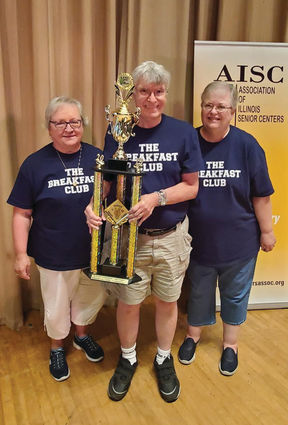 From left: Gloria Moeller, Dan Moeller and Cheryl Robinson pose with the State Senior Brain Games Championship trophy after winning the competition on Aug. 12 at the Illinois State Fair in Springfield. They represented the Senior Resource Center.

We are the champions! For the second year in a row, a team from the Senior Resource Center has claimed the State Senior Brain Games Championship. Freeport residents Dan Moeller, Gloria Moeller and Cheryl Robinson, who call themselves the Breakfast Club, won the title in August at the Illinois State Fair by besting five other teams from around the state. The competition occurred on Senior Day at the fair.

The Breakfast Club earned the right to represent the Senior Resource Center by topping three other teams in a Local Competition earlier this year.