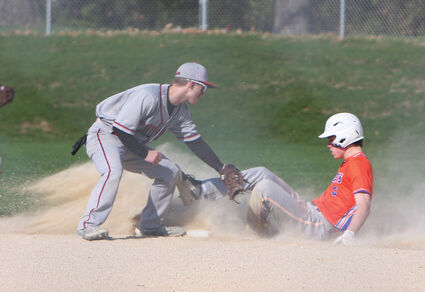 Kellen Henze completes the steal of second base against Forreston.

A three run fourth inning put the Panthers out in front, and they stayed there thanks to a strong pitching effort from Brody Mahon.

Catcher, Rowen Schulz led the Lena-Winslow assault with two hits and two RBIs in the game. Jake Zeal also had two RBIs. Both teams only managed five hits, but Amboy committed four errors in the field, while the Panthers only made one.

The Warhawks smacked out 17 hits against Du/Pec pitching – scoring 12 runs over the first two innings of the game t...