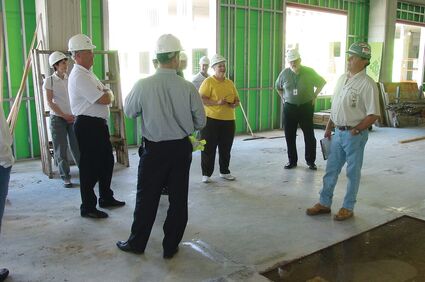 Board Tour Photo 2010 – Former (and current) board members including Dr. Rachel Long, Chuck Dearth, Steve Borowski, Dr. Darren Pipp, Sr. Jomarie Zielke, and Ron Spielman are given a tour of the new Monroe Clinic Hospital addition while under construction in 2010.

This March, SSM Health Monroe Hospital (formerly Monroe Clinic Hospital) celebrated a milestone anniversary. It has been ten years since the hospital expansion was opened on March 24, 2012.

Monroe's original St. Clare Hospital was built by the Congregation of the Sisters of St. Agnes and opened in 1939. The congregation, based in Fond du Lac, Wisconsin, established a hospital in Monroe by invitation. St. Clare Hospital expanded in 1950, and again in 1970, to meet the growing needs of the communities it serves. In 1992, St. Clare Hospital and Monroe Clinic consolidated their services...