Aquin Haunted By Plays Not Made 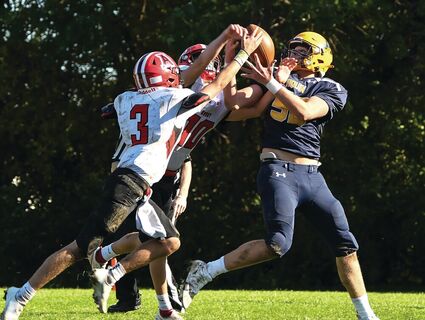 Aquin's Ollie Arndt battles for possession of the ball against two Amboy defenders.

That was definitely the case at Aquin High School Saturday as the Bulldogs fell to Amboy-Lamoille 52-28 in the first round of the 8-man league playoffs. The loss closes the first season Aquin has played in the league adapting to new rules and a different way to play football. Although they exited the playoffs in the first round, it still was a respectable start on a new chapter in Bulldogs football.