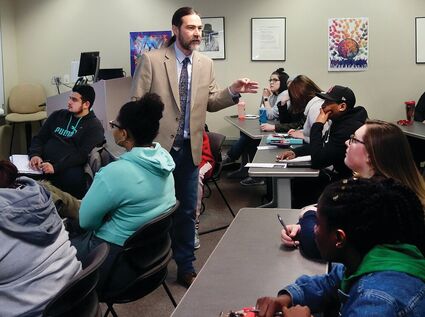 Michael Maher lectures students in a class at Spoon River College in Macomb.

A graduate of Lena-Winslow High School in 1991, Michael Maher admits he was not a good student, had no idea of where his life was headed but was expected to go to college. He enrolled at Highland Community College. He said, "I was academically lost."

"Highland saved my life," Maher said. "Had I attended a university, I would have failed. Highland gave me the type of exposure of what was available to me. My instructors gave me their time, their guidance and when I graduated in 1993, I was headed to Western Illinois University, and I knew I wanted to teach at a community college when...