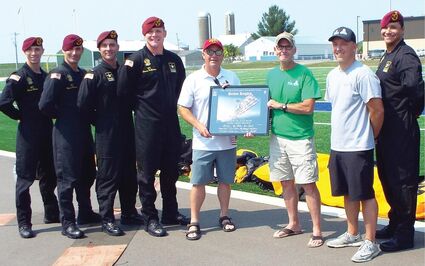 On Saturday morning, July 3rd, the Village of Hazel Green welcomed and sponsored the U.S. Army Golden Knights Parachute Team. They jumped into the L.B. Carnes Football Field at Southwestern High School in Hazel Green. As part of the event, the team presented Apple River State Bank a Service of Excellence Award for their involvement and community support since opening their Hazel Green office in December 2019.

The Golden Knights are one of only three Department of Defense-sanctioned aerial demonstration teams, along with the U.S. Navy Blue Angels and the U.S. Air Force Thunderbirds...