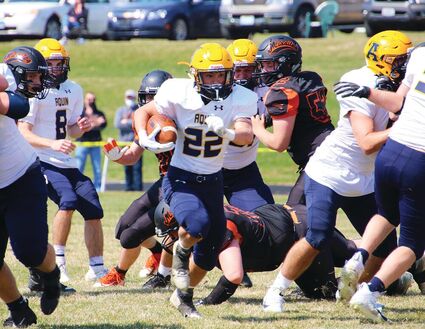 Ty Stykel breaks through up the middle for a 42 yard touchdown that put Aquin up for good.

The Aquin Bulldogs stayed undefeated on the season at 3-0 but they had to work hard for it on a trip Saturday to Milledgeville.

While the final score showed 40-14, the game was much tighter than that early as the first half featured big plays from both teams and both the Bulldogs and the Missiles holding the lead at some point. Aquin held a slim 5-point lead as the teams headed to halftime but then came back re-focused and re-energized in the final two quarters to seize control of the game and put it out of reach for good shortly after the 4th quarter began.

The Bulldogs got on the...