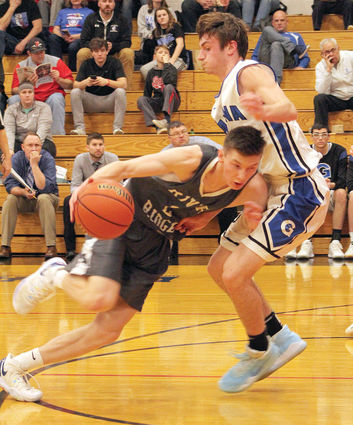 Andrew Merkle tries to drive the lane against Galena during their Regional quarterfinal matchup.

The River Ridge Wildcats entered the fourth quarter of their Fulton Regional first round matchup with the Galena Pirates trailing by one point. Two minutes into the fourth, Tayden Patterson completed a three-point play, giving the Wildcats a two-point lead. From there, River Ridge only managed two more points as the Pirates pulled away for the 56-44 win.

Right after Patterson converted the three-point play, Jacob Townsend tied the game with a putback down low. A minute later, Townsend made a turnaround jumper from four feet out. After a free throw by Conor Behr, Townsend made another short...