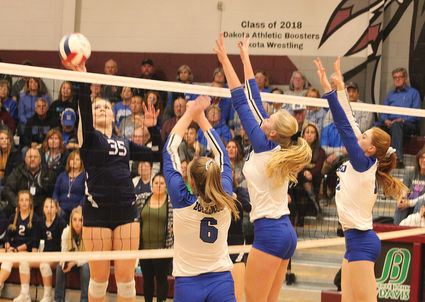 Abby Barr gets a lot of attention from the Durand front line blockers.

While the importance in having talent cannot be overstated for a team in any sport, having the mental strength to face adversity, which is sure to come at some point, is equally important. That was on full display in the semifinal matchup of the Dakota Regional between Aquin and Durand.

The first and third sets were close throughout, with the experienced, battle-tested Durand Bulldogs coming out on top. In the second set, Aquin jumped out to an early lead and Durand looked defeated, failing to mount a comeback when the opportunity presented itself.

You would expect Durand to be mentally t...