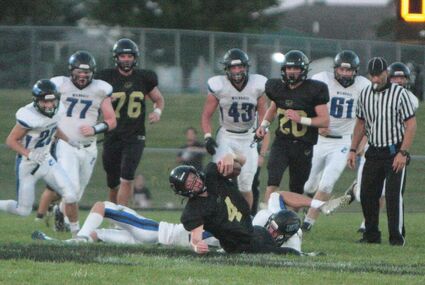 While Gunar Lobdell was getting most of the pre-season hype for the Lena-Winslow Panthers, it was senior Gage Dunker who bulldozed his way to 94 yards and three touchdowns to lead the onslaught in a 60-6 victory that was really a lot closer than the scoreboard.

The EPC Wildcatz were off to a good start. After getting the opening kickoff at their own 19, they ran a collection of runs up the middle combined with an option to either side, and had put together three first downs to move the ball to their own 44.

But on third and five, quarterback Carsen Heeren's pass was deflected by Dunker at...