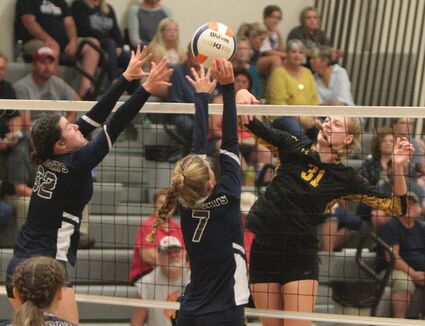 As soon as the Panthers saw Grace Groezinger draw a double block, they would fake the set to her in the middle and shoot the ball long to the Chicken Nugget (Kaidynce Lynch) on the outside.

Both the Lena-Winslow Panthers and River Ridge Wildcats were able to make an early season assessment of where their respective volleyball teams stood early in the season when they squared off in a non-conference battle at River Ridge Thursday night.

And following the Panther's three game 25-22, 20-25, 25-7 win, both teams could make a strong argument for being satisfied with where they stood right now.

A pattern developed early in game one, and continued throughout the night. The Panthers, who had more size at the net, were attacking from both the middle – with Grace Groezinger and Moll...