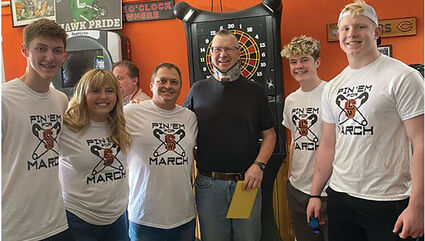 Jason March (center) stands with students and staff at the recent meat raffle held in his honor.

I would like to thank everyone for the support they have shown me since my accident.

Saturday February 5, I was sledding with a Scout Troop. When I hit my head on a tree putting me unconscious. An ambulance was called, and I was taken to Saint Francis Hospital in Peoria. Where they drilled two holes in the skull to release pressure on the brain. As my condition worsened, I was given last rites and put on a ventilator.

I was in the hospital for three weeks. The first two weeks, I have no memory. I was released from the hospital on February 21, but needed to stay with famil...