From Despair To Elation 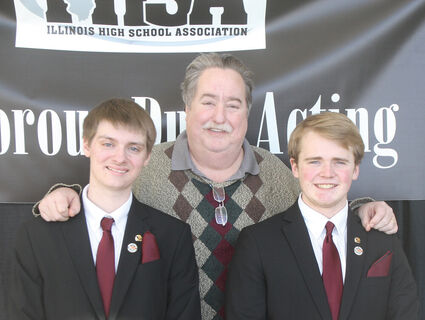 Trace Williams, Coach Dan Stevens and Justin Eden pose for a shot at the IHSA State Speech Finals in Peoria.

Anybody who read the story in last week's Village Voices knew what happened. Justin Eden and Trace Williamson of Stockton, had been torpedoed in the final round of the IHSA Sectional Speech Tournament at DeKalb by one lone judge, who could not justify the ranking, but gave them a "seven" (last place) in the final round.

That one score was the only "down" score the duo had received all day throughout the entire competition, but it was still low enough to deny them their dream and a trip to the State finals as it put them in fourth place overall, with only the top three advancing.