Kill Them With Class 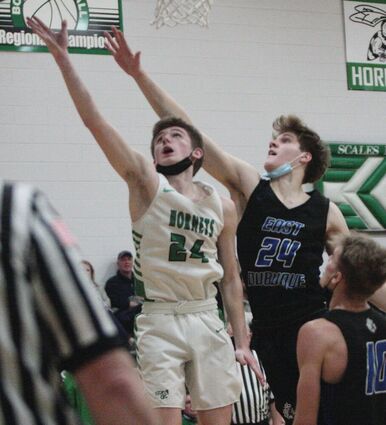 Sam Cocagne converts the layup during second half action against East Dubuque.

Many people thought that East Dubuque was the only team that had a chance to knock off the top ranked Scales Mound Hornets in the NUIC-West.

Well, they were wrong.

After overcoming a rather rude student section at East Dubuque the Friday before, the Scales Mound Hornets took little time in blowing by the Warriors at home Wednesday night in yet another dominant performance.

With three minutes to play in the first quarter, the Hornets only held a 4-2 lead. East Dubuque was sitting in a spread out 2-3 zone, almost daring Collin Fosler to shoot from the perimeter.