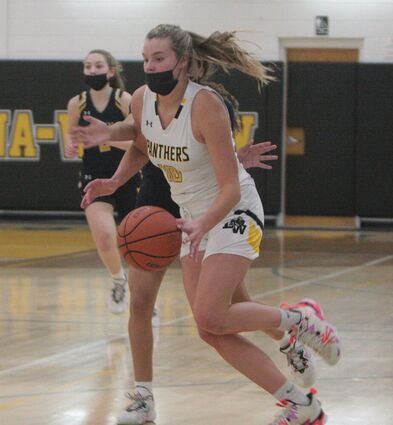 Kalli Humphrey had a huge night with 22 points to lead the Panthers past Aquin in the NUIC North battle.

Several times throughout the season, members of the Lena-Winslow Lady Panthers, would ask if I thought they could win a certain game, and my answer was always the same.

"When you guys are hitting your shots, you can beat anybody."

But all too often the Panthers would be plagued by sub-par shooting – especially from behind the three point line. But in their showdown for second place in the North behind Orangeville Wednesday night in Lena against the Aquin Bulldogs, the Panthers put all the pieces together to claim an impressive 54-46 victory.