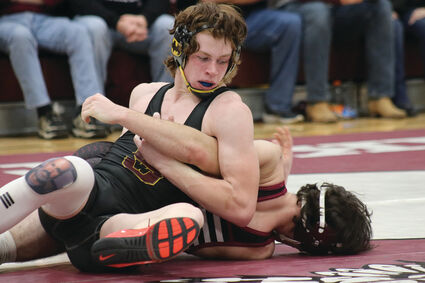 Griffin Luke gets the pin over Dakota's Adrian Arellona

Halfway through their annual showdown with rival Dakota, the Pantherhawks were on the wrong end of a 18-9 team score. But then everything began to turn as Jared Dvorak got the party started with a hard fought 7-4 decision over Case Rockey of Dakota to close the margin.

The big swing came when Griffin Luke pinned Adrian Arellona at the 2:34 mark to make the score 19-18. With both teams knowing they would be trading forfeits later in the match, everything ultimately came down to the heavyweight bout between Mike Haas of Lena-Winslow/Stockton and Dakota's Avery Bowers.