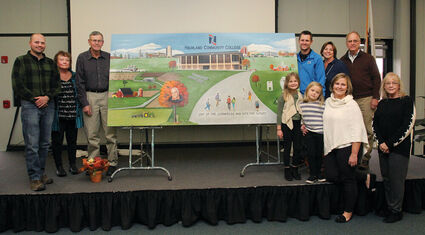 Linda Vietmeyer, right, stands next to the family members of Delbert Scheider after the unveiling of the mural created in his honor at Highland Community College in Freeport. [PHOTO PROVIDED BY HIGHLAND COMMUNITY COLLEGE]

Jeff Reinke, the executive director for the Foundation, praised Scheider's unwavering optimism and vision, noting that his influence will endure throughout the region.

Reinke said, "Del loved education, agriculture, and Highland Community College. He led with a deep passion that was rooted in a hope for a better future for those around him. As a founding father of the college,...