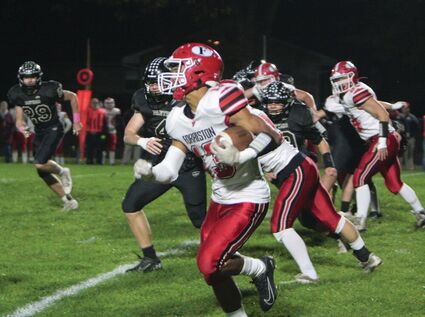 The Cardinals put together an 89 yard drive that took over eight minutes off the clock and ended with a touchdown at the final buzzer as Forreston stunned Lena-Winslow.

It was a scene Panther fans had seen plenty of times before ... never by the opposing team. Lena-Winslow was the ground pounding club that slowly and methodically drained the life out of their opponents. But this ... this was Forreston ... driving 89 yards ... in 22 plays ... over more than right minutes ... and the Panthers were powerless to stop them.

In what will be talked about for years to come, and adds yet another chapter to the folklore regarding the Panther/Cardinal rivalry, the Forreston Cardinals trailed Lena-Winslow 20-16 with over eight minutes to play in the fourth quarter. A...