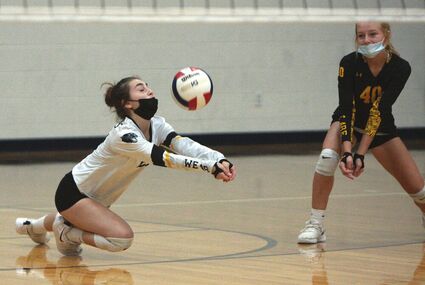 Panther JV Libero, Janessa Esser, makes a save in action against Aquin.

With area volleyball teams heading down the backstretch towards the Regional tournaments, not a lot of attention has been spent on one group of athletes who have been flying under the radar – but are beginning to make people take notice.

The Lena-Winslow JV volleyball team, has been winning ... a lot. In fact, when head coach Stephanie Matz was asked after a three game victory over Eastland if they had lost yet, the reaction was quick.

But we kept an eye on the baby Panthers, and after they took down their t...