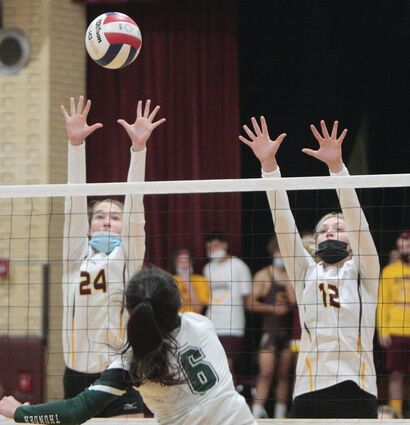 Freshman Madalyn Mammoser (24) and Senior Kenzie Haas (12) each made two stuff blocks against West Carroll as Stockton dominated at the net.

The Stockton Blackhawks started three freshman in their conference battle against West Carroll Wednesday night, but you would have bet money that it was the Thunder who were inexperienced and out of sync as the Blackhawks claimed a 25-21, 25-18 victory on senior night.

"They've improved so much, they're already a big help on the floor," said senior Kenzie Haas of the freshman starters.

"What's impressive is when you see how far they've already come, just think about how good they're going to be," added Brynn Haas.