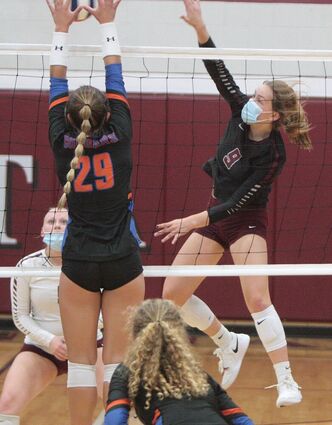 Dakota went to Abi Schlueter early and often in game two to rally back and claim the non-conference match win over Eastland at Dakota Monday night.

Dakota superstar, Abi Schlueter, got off to a rough start as her first two kill attempts against the Eastland Cougars were stuff blocked by Eastland's Annika Myre. But Schlueter regrouped in games two and three, and when she did ... Eastland had no answer as mistakes came back to haunt the Cougars in a 25-14, 17-25, 19-25 non-conference loss to the Indians in Dakota.

Game one was dominated by Eastland. They stormed out to the early 5-1 lead thanks to Myre's stuff blocks, and everything seemed to fall for Eastland. The most telling play was when a second hit went off kilter and Addison Burk...