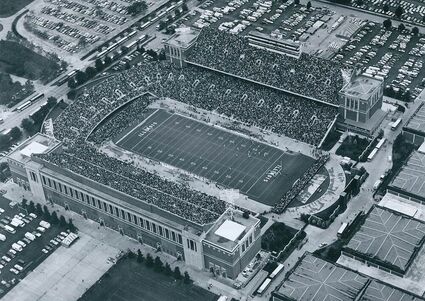 In this aerial photo handout, Memorial Stadium, originally dedicated in 1924, honors the 189 Illini who died in World War I, each memorialized on one of the limestone columns that support the stadium's upper stands, lower left. The stadium is home to the University of Illinois football team. (UNIVERSITY OF ILLINOIS PHOTO)

On Monday, monuments and memorials dedicated to those who served in the armed forces in Illinois will serve as the background for events to recognize Memorial Day.

The monuments, which range from big to small and old to new, were built with the purpose of serving as permanent markers. The biggest include stadiums, like Chicago's Soldier Field or Memorial Stadium on the campus of the University of Illinois at Urbana-Champaign. The smallest includes the recently dedicated memorial in unincorporated Illinois City in Rock Island Count...